A brief summary of the Science & Technology Committee”s “ClimateGate” hearing

The House of Commons Science and Technology Committee met yesterday for a one off evidence session looking at the disclosure of climate data from the Climatic Research Unit at the University of East Anglia. This blog post is a brief summary of the key issues. [Apologies for the use of some jargon that crops up because of the nature of the CRU emails.]

Lord Lawson and Dr Benny Peiser were first up. They represent the Global Warming Policy Foundation who, amusingly, failed to plot 8 temperature values correctly in their logo – I”m not sure that this gives them the authority to question 25 years of academic research on climate data but let”s see what they had to say…

Lawson’s main point was about the fundamental importance of transparency in science (not that Lawson or Peiser have ever been scientists). However, he would not answer the question put to him about who funds his organisation – this was a bit of a cheap shot but it helped make the point that transparency is only important to them in other organisations.

Evan Harris MP did excellent work in setting Lawson up for a fall in his questions about the “…hide the decline…” emails. Lawson was claiming that the details of dendroclimatology divergence were not discussed in any of the subsequent key papers on tree ring based climate reconstructions. Harris then got Lawson to agree that if the CRU scientists could show that they did discuss this matter in their publications then this was not an issue. This comes up again later.

Lawson also brought up an incorrect criticism of satellite measurements, which was subsequently corrected, and claimed that the hockey stick graph was “fraudulent” and periods of it were based on only one tree, claims which he has no evidence to back up.

Ian Stewart MP also asked some questions about work that the GWPF plan to do that highlighted their lack of scientific credentials or ambition. Lawson also brought up an incorrect criticism of satellite measurements, which Prof. Julia Slingo (MetOffice) would subsequently correct, and claimed that the “hockey stick” graph was “fraudulent” and periods of it were based on only one tree, claims which he has no evidence to back up.

Next to be questioned was Richard Thomas CBE, UK Information Commissioner (2002-2009), who provided some quite technical details on Freedom of Information – I’m not too sure what he added to the session. I suspect I do not understand enough about FoI laws but my interpretation of his evidence was that CRU may or may not have done anything wrong and that methodology, if documented, has to be distributed under FoI requests but there is no requirement to document it. 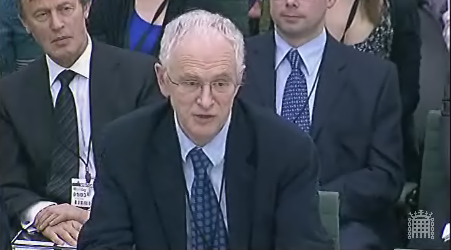 I felt that the most important witness, Prof. Phil Jones (accompanied by UEA vice-chancellor Prof. Edward Acton), did not look particularly well and spoke a bit shakily. He went over quite a bit of the background to CRU’s work and data policies and delt with most of the issues. However, he could have done much better when asked about reproducibility of CRU’s gridded surface temperature products by others: all he needed to say was that as long as someone spent the time collecting the data from meteorological organisations and read some scientific papers then they could, with a bit of work, re-produce the CRU temperature product! Reproducability does not mean that you have to give anyone everything you’ve ever worked on.

This was typical of his statments – it seemed like he missed the point of many of the questions – this was quite a contrast to Lawson who was obviously more comfortable with the rhetoric required to successfully get through these sessions. In particular, Jones” statement that he”d sent some “awful emails” was probably meant as a joke but it didn”t get any laughs.

It seemed like Phil Jones missed the point of many of the questions – this was quite a contrast to Lawson who was obviously more comfortable with the rhetoric required to successfully get through these sessions.

Evan Harris MP completed his manoeuvre of highlighting Lord Lawson’s misunderstanding of the divergence issue – Phil Jones described that the “trick” was discussed in a Nature paper, where he suspects they were the first group to use the term “divergence”, and that they were explicit in subsequent papers about this issue. I suspect that this will be a key point in the committee”s report.

Harris appeared to be the only member of the committee that understood the background enough to have devised a consistent line of questioning to the witnesses. Indeed, some of the questions from other committee members made it clear their understanding of peer review and research methods was not great.

My live streaming of the event cut out as Sir Muir Russell (Head of the Independent Climate Change E-Mails Review) took the hot seat so I missed his and Prof. John Beddington (Government Chief Scientific Adviser), Prof. Julia Slingo OBE (Chief Scientist, Met Office) and Prof. Bob Watson”s (Chief Scientist, Defra) statements but, reviewing the Gaurdian live blog of the session, there don”t seeem to have been any more bombshells. The most important development was that the quite negative Institute of Physics evidence submission came up – the final group of witnesses felt that it pre-judged the outcome of the enquiry.

My overall impression was that the committee, as well as the GWPF, didn’t seem to understand enough about the scientific process to make progress in this case: papers don’t have a right to be published – they have to be good enough; scientific methods are discussed in papers but no-one publishes computer code of how the analyses were performed (this should probably change though). Phil Jones was also not well prepared to answer general questions from a non-specialist panel and would clearly prefer to deal with arguments in the pages of peer-reviewed journals.

My overall impression was that the committee, as well as the GWPF, didn’t seem to understand enough about the scientific process to make progress in this case.

Update: The Institute of Physics have recently “clarified their position”.